Pretty much everybody has some idea about how to prepare food.

As one generally uses knives to prepare food, it's fair to assume then that most people have used knives at some point in their lives, to slice tomatoes or apples, chop vegetables, maybe carve a roast. Some may even have cut up joints of meat before cooking.

(I actually know this is not 100% true from a first hand account from friend Toby, of a young lad who had lived on prepackaged, pre sliced, food all his life and had no idea that a knife often had a non sharp side, but I digress)

Put a sword in people's hands though, and suddenly this memory is lost, I guess because it's a different shape and not in the kitchen? Who knows ...
Anyway, what happens is that many students use the sword like they are holding a crayon and trying to write on their adversary, instead of trying to cut, slice, gouge, or stab them.

You will never understand why sword play looks like it does and moves like it does if you don't use the weapon for what it was designed. Everything is based around that.

So here's a hint (I know it's weird but ... ), to gain a better understanding of edged weapons, start thinking of your opponent as food. 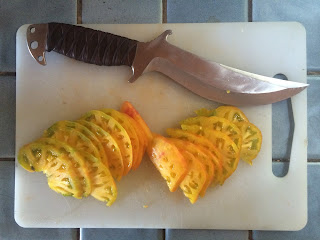