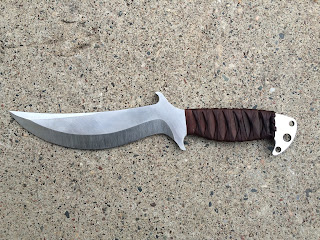 I've been rather lax on posting lately. I have to admit that my creative attention has been turned elsewhere for the last few months.
Earlier this year, my good friend Toby Cowern at http://treadlightlysurvival.com/ came up with a design project, a collaboration between me, Rory Miller http://chirontraining.com/Site/Home.html , and himself to design a knife.

As it turned out, we decided the best way to do this was to each take a lead on a blade, with the others adding comment/critique as necessary.

And finally our first creation is finished and it ended up being my lead.

Despite being incredibly opinionated about blades, something for which I blame fully on having handled Sonny's designs and modifications, I did not realize how immersed I would get into designing something myself.

I realized I wanted something that would feel in the hand like it wanted to move and work, in the same way that anything Sonny made moved and worked.

I wanted the balance to be right, and because of the importance of feel, we decided to work with Will Capron, a fabricator of hand made knives in Minnesota. You can find him on Facebook at https://www.facebook.com/willcapronknives/?fref=ts

Will was willing to work with me to get the balance and feel exactly how I wanted, and we ended up spending some days together refining, grinding, troubleshooting, and working on the handle and sheath designs.

As an artisan myself, I am a huge supporter of high quality, hand made, products, and will do anything I can to support those who care about their work and make cool stuff.

And this is 'cool stuff'.

Check it out if you would be so kind. You will see this first knife 'in action', with all the inspiration and design elements that form this blade explained.

I wanted to correct a student who has a tendency to extend their arms out too far, so, I gave them a long staff to practice with. Long weapons are heavy and difficult to balance if held away from the body. Feeling this, the student started quite naturally to keep the hands in better positions, and also use their back hand as the 'power' hand more than they had been.

Empty hand, Xing-Yi is known for it's short power generation, which perhaps seems weird for a system trying to extend it's power through a spear or similar, but it makes complete sense. Long and heavy weapons dictate the hands and elbows do not extend too much, and that it's the body that follows that creates the power. The hands and arms are just the delivery device. You have to use the body (and movement), not the arms, to strike with.

So with short, as with long.

Interestingly enough, I was also trying to correct a student who has a tendency to step too narrow, almost crossing their feet as they move. Xing-Yi, demands a stance that is a little wider to accommodate the weight and length of pole arms from which it was developed, so again I tried adding the weapon to see if the footwork would appear.

No change in footwork. Hunh.

So I added me, as the opponent, holding the center line. To move, the student had to take my weapon off the line so that they could create an opening and strike. (They can do this using timing and evasion of course, but best not to rely on always having this.)

Bingo! You can't use a narrow stance against the pressure of an opponent holding the center with a pole arm, you have no stability .. feeling this, the footwork shown in the form appeared with no correction.

I talk about it all the time in Eskrima. Each sword or weapon has a characteristic way it moves and needs to be wielded. Put that weapon in the hands of the student, and give them a 'problem' to solve,  and all the reasons for why the footwork, the hand positions, and the body alignment have to be as they are, become instantly much clearer. Take the context away however, and now you are fixing things in foot placement and alignment that are abstract and imaginary.

Of course you can do this empty hand through applying pressure that the student must move around or deal with, but I have to say, using a weapon seems more immediate and efficient.  Everything is more obvious and harder to fake when a long weapon is in play. Using structure with alignment is the only way.

It's funny that we teach unarmed before weapons in so many systems. If we did it the other way around, perhaps people would learn much faster ....?
Posted by Maija at 1:34 PM 2 comments: